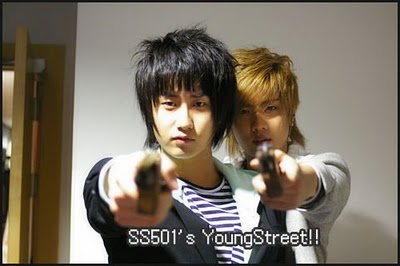 Korea popular male group SS501 members Kim Kyu Jong and h** Young Saeng, will start their Asia fan meeting tour starting from Seoul Korea, they will also meet their fans in Taiwan, Thailand, HongKong, Indonesia and Japan. HongKong will be their 3rd stop for this trip, which is scheduled to hold on 8 January.

After Kyu Jong and Young Saeng signed on to join Korea top female singer Lee Hyori's agency B2M Entertainment, this is their 1st fan meeting in HongKong. 2 top idol singers will specially come to HongKong to meet with fans, mainly to thank their fans' continuous support for all these time, after this they will start their solo activity.

The HongKong fanmeeting of KyuJong and Young Saeng early next year, is definitely a big good news to Greater China, HongKong and Macau's TripleS (SS501 fans). Other than live singing performance, Kyu Jong and Young Saeng will also have direct conversation with fans, playing games and also will reveal their oversea tour and personal daily life video clips. Fans will be able to see a completely new image for both of them.

Kyu Jong is SS501 member, in year 2006, he acted in a 'b-boy' role in Music Channel Mnet's Hip-Hop Musical 'Break', with his exceptional acting and dancing skill, he became famous overnight in South Korea , his popularity increased even tremendously after SS501 recorded 'Boys over Flowers' OST 'Because I am stupid'. As for Young Saeng, he is SS501 lead singer, with his beautiful and pleasant voice and unique 'Prince' qualities, mesmerized and attracted lots of fans* in Asia. (*万人迷 has a literal meaning of means a person who is incredibly attractive, trendy, cool and loved by millions of people).

Although SS501 members belong to different agencies, however the 5 members are still deeply and madly loved by South Korea and Area region fans. For KyuJong and YoungSaeng's Seoul fan meeting, the ticket for their first session on 4 December was sold out within 10mins, under the pleas of the fans, they immediately added another session, the tickets were sold out in 5mins also. Their ticket sales this time has top in many charts including No. 1 in 'Auction Ticket Sales Chart'.

Thereafter, the pre-sale for 11 December tickets in Thailand and 22 January first session ticket in Japan were also sold out almost immediately on the same day, they have even added a 2nd session in Japan immediately to fulfil the needs of fans. From this could see the vast fans anticipation and support for these 2 idols and SS501.

KyuJong and YoungSaeng will be the first to visit HongKong after their group members sign on with different management agencies, it is believed that they will cause a stir in HongKong and fans will also rush to admire these 2 idol.

Page 1 of 1
Permissions in this forum:
You cannot reply to topics in this forum
Latest topics
» hyun joong's personalized wake up call + ringtone